With the Wireless Alert Range

See Full Article Living on a canal boat is now becoming a viable option for many adults in the UK. However, living on a boat is very different to living in a...

PanelPilotACE as Display for Inclinometers

2GIG Engineering, established in 2015 out of Maine, has been manufacturing inclinometers (also known as tilt sensors) for companies in many different industries. These...

USB data loggers give biologists critical insights into the hibernation patterns and survival of bats.

Since it was first reported near Albany, NY during the winter hibernation period of 2005-6, White-nose syndrome or WNS, caused by a cold-loving fungus, has decimated North...

The EL-MOTE at the Power Networks Demonstration Centre

The PNDC research facility The University of Strathclyde Power Networks Demonstration Centre (PNDC) is a research, demonstration and deployment centre for emerging...

LICKALIX install the EL-MOTE to ensure their Ice Lollies are stored safely.

In a busy and growing company, it’s important to save time and leg-work while still maintaining storage regulations. The founder of ice lolly brand LICKALIX was looking...

Established in 2008, Be Green Solar specialises in the design and installation of solar, wind and micro-hydro renewable energy systems for Non-Governmental Organisations....

During our summer BBQ at our local watering hole The Royal Oak in the picturesque  New Forest we got talking to the Head Chef about our range of EL-WiFi temperature and...

Monitoring chilled and frozen seafood with the EL-WiFi-TP

Nowadays, with fishermen using global  GPS mapping to locate fish stock, we weren’t surprised to get an enquiry from a seafood company as their industry is clearly...

EL-USB-2-LCD temperature and humidity logger from FilesThruTheAir was used by research team in discovery of new type of Rain Frog through measuring environmental factors.

A team of researchers in Ecuador, led by Paul Szekely, used our EL-USB-2-LCD temperature and humidity data logger to assist their study of the composition of amphibian...

After receiving great feedback about the use of our  EL-WiFi data loggers  from the  Wessex Regional Genetics Lab in Salisbury Hospital , we spoke with the...

Monitoring Temperature During Transport and Delivery

Iceotemp Ltd provides a dedicated, temperature-controlled, time-critical distribution and delivery service on a 24/7 basis, across the UK and Northern Europe. Operating 16...

Temperature and Humidity Monitoring at CERN

WiFi sensors at the LHC

After a two year hiatus, recently we finally saw the Large Hadron Collider - the world's largest and most complex set of scientific instruments - restart. Some of the best...

Temperature and Humidity Monitoring in Antwerp

Antwerp, a popular tourist destination in the Flanders region of Belgium, is home to many significant historic and contemporary attractions, including the former home and...

Audio Mix House is a state-of-the-art production and recording studio in Nevada.  The six studios are purpose-built for tracking and mixing, with live rooms, vocal...

The Rochdale Pioneers Museum is housed in the same building as where the Rochdale Equitable Pioneers Society began trading on 21 December 1844. The site is regarded as the...

ZD Zagorje is a health care centre based in Ljubljana, Slovenia. The practice is a full-service centre offering private care, health education and a pharmacy. Child...

Fishbourne Roman Palace is set in the village of Fishbourne, Chichester in West Sussex. A large palace, it was constructed in the 1st century AD, around thirty years after the...

Taking the speculation out of renovation

Heritage Field Services began trading in 2010, and since then have been actively involved in archaeological projects; surveys of sites, monuments and buildings; conservation...

Monitoring all temperatures from one central point

We had an incident where we had a power outage and were then unable to see if the vaccines temperature had fallen outside of the required guidelines. This meant that...

Taking the leg work out of data logging

With more than 80 years of experience, Fuchs Cereals is a leader in the processing and production of cereal-based produce, which the company distributes to over two dozen...

Temperature and Humidity at CERN

At CERN, the European Organization for Nuclear Research , physicists and engineers are probing the fundamental structure of the universe. They use the world's largest and most...

WiFi Sensors: Top of the Class

For over 20 years Airway Air Conditioning has prided themselves for providing customers with a first class service with the installation, maintenance and repair of air...

PanelPilotACE as Display for Inclinometers

2GIG Engineering, established in 2015 out of Maine, has been manufacturing inclinometers (also known as tilt sensors) for companies in many different industries. These inclinometers are made to accurately sense angular movement in stable to harsh conditions and provide feedback data to the end user in degrees. The inclinometer creates an artificial plane defined at zero degrees and measures the change in angle with respect to this plane.

2GIG has found the PanelPilotACE ideal for displaying position information from their inclinometers for products serving a number of different industries. Jody Knowles, Owner of 2GIG Engineering explains, “We have used PanelPilotACE in conjunction with our tilt sensors in numerous applications. The PanelPilotACE is used to provide the touchscreen interface in a wireless control system for our sensor. By touchscreen command we can modify trip angles, delays, output rates, adjust analog ranges and log data.” 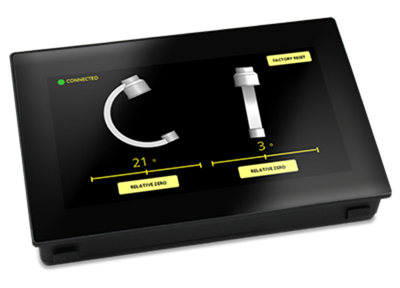 2GIG Engineering has developed products for the medical industry, being commissioned by Trinity Orthopedics to create an inclinometer for a new piece of spinal surgery equipment. Jody explains, “Trinity Orthopedics in California has created an accessory for a C-arm X-ray machine. This is used to place pins accurately for spinal surgery without the need to take excessive X-rays for placement. If the machine needs to move just 1 mm or .1 degrees, a person cannot move the machine with enough precision. We helped them with the drive motor system, along with one of our tilt sensors for rotation of the C-arm. The PanelPilotACE SGD 43-A was used to display the tilt angle from sensor data obtained over a wireless connection. This allows the surgeon to place pins more accurately, using less radiation, and to communicate better with other staff helping with the pin placement. Prototyping has been great so far.”

Another use has been for Alpha Stabilized, to help stabilize filming cameras. The 2GIG inclinometer provides tilt and roll feedback to the operator, to ensure the camera is at the proper angle for filming. An XBee wireless module was used to send data from the inclinometer, and The PanelPilotACE SGD 43-A provided the custom HMI (human machine interface) to display the data in real-time. Owner Jody explains, “This was one of my favorite projects we have worked on recently in which we have used the PanelPilotACE. Thanks to the drag and drop feature of the Design Studio, it is very quick and easy to create a project. The software is very user friendly.” 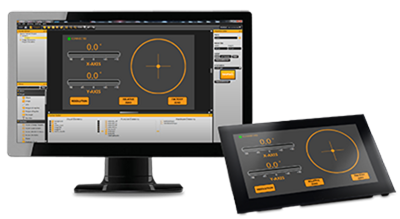 A 2GIG inclinometer has been used by MD Helicopters to monitor the helicopter’s angle whilst in flight. For this, 2GIG displayed output from their dual axis analog sensor on The PanelPilotACE SGD 70-A, with the 0-5V outputs from the sensor connected to PanelPilotACE’s two analog inputs and converted to a digital reading.

Another unique project for 2GIG was to create a dredge with a simple display to provide the digging depth for suction cutter dredges. 2GIG chose the SGD 70-A to be paired with their wireless battery-operated tilt sensors. The package will allow the dredging operator to set the ladder length and target dig depth along with over and under dredging tolerances.

PanelPilot ACE displays allow you to rapidly develop a custom panel display or touchscreen interface. They offer a wealth of analogue and digital I/O, making them suitable for use in automation control and as HMIs. The Design Studio PC software provides an easy way to develop your interface using drag-and-drop software.